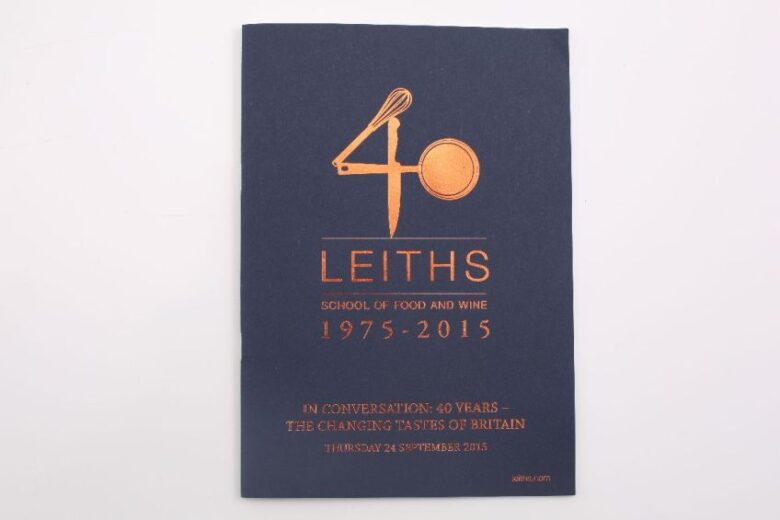 In September we were lucky enough to be invited to attend the Leiths School of Food and Wine 40th Anniversary Celebration at Bush Hall in London’s West End. When we arrived at the venue preparation for the evening was in full swing. We’d arrived before the rest of the guests so that we could drop off 280 copper tri-ply mini-pans for the guests’ goodie bags which also included a bottle of Belazu Balsamic Vinegar, a box of Cornish Sea Salt Co. salt and a Leiths’ spatula.

There was a buzz in the air when doors opened at 6:30pm. Bush Hall dates from the early Edwardian period; with high, decorative ceilings and stunning chandeliers it was easy to imagine the former dance hall in all its glory in the roaring twenties. The celebrations started with a champagne reception and one of Leiths signature canapes – a Black Pudding Scotch Egg.

At 7.30pm it was time to take our seats. Camilla Schneideman opened the evening with a brief welcome and an introduction to the Children’s Food Trust a charity which aims to spread ‘skills, knowledge and confidence to cook from scratch’. We then heard from the CEO of the Children’s Food Trust, Adam Starkey, who explained a little more about the charity’s mission.

Caroline Waldegrave OBE, Leiths’ founding Principal, introduced the topic of the changing tastes of Britain. She shared an anecdote about the challenges of making pesto in the 1970’s: as recently as 30 years ago modern-day staples such as garlic were difficult to come by because they were considered to be foreign or eccentric. Caroline even had to turn to her mother’s garden for parsley and other herbs to use at Leiths because they weren’t readily available in the shops.

After the introductions the panel of experts took to the floor to talk about 40 Years – The Changing Tastes of Britain. The panel included:

Yotam Ottolenghi Israeli-born chef and restaurateur whose fresh and unique style has helped to introduce Britain to a variety of new and exciting ingredients.

The evening was chaired by Tim Hayward who was named ‘2014 Food Writer of the Year’, by The Guild of Food Writers. Tim Hayward opened the discussions by asking the panel what, in their opinion, had had the biggest impact on the development of food in Britain over the course of the last 40 years.

The panellists cited the end of rationing as a pivotal moment in the ‘story’ of British attitudes to food. Changes which began in the late forties gathered pace in later decades. Prue Leith observed that the rise of chef-patrons in the 1960’s meant that chef’s had more freedom in terms of what they were producing. Rick Stein pointed out that people began to eat out more regularly and to travel more widely. The British were discovering different ingredients, flavours and styles of cooking.

The panel shared a few anecdotes about their own ground-breaking experiences. Rick Stein recalled that when he first put a Goan Fish Curry onto the menu in his Padstow restaurant in the 1980’s he was worried, “I didn’t want to upset the Good Food Guide”, adding whimsically, “but now who gives a stuff?!”

It was observed that French cuisine had long been regarded as being at the absolute pinnacle of ‘good food’ but the panel agreed that “serious food doesn’t have to be French anymore.”

Yotam Ottolenghi made the point that food has become more ‘democratised’. Gizzi Erskine added that the internet has revolutionised the meals we cook. They shared the view that consumers are now leading the way, choosing from a wide variety of cooking styles and ingredients. In addition, diners are moving away from formal restaurant environments to more casual settings with many of us subscribing to the idea that good food shouldn’t break the bank.

To round off discussions Tim Hayward asked, “What do you think we will see more of in the next 5 years?”. The panel predicted that the move away from ‘meat and two veg’ as a staple dinner would continue and there would be an increase in the variety and quantity of vegetables consumed. They suggested that grains, such as buckwheat, would become more mainstream and that offal would make a come-back. To the astonishment of some of the panel and audience members there was even a suggestion that insects might make their way onto dinner plates!

We really enjoyed the relaxed atmosphere of the evening and the frank manner in which the panel discussed the topics. The broad spectrum of experience embodied by the panel really helped to emphasise the journey of food in Britain over the last forty years and left us excited about the possibilities for the future.

As the discussions closed the festivities began. To the delight of the guests The Hill Food Company treated us to some of Leiths’ signature canapés and we even got to sample some of Maison Louis Latour’s stunning wine.

We would like to congratulate Leiths on 40 years spent at the forefront of the good food revolution in Britain and to thank them for the interesting, entertaining and ‘delicious’ evening. 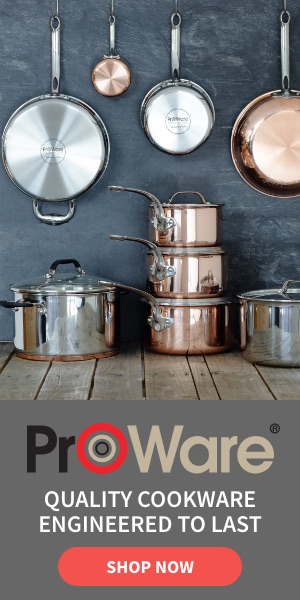 Enjoy news, reviews and offers, straight to your inbox*

*We hate spam as much as you do, we will never pass on your information to any 3rd parties.

ProWare is a small family organisation based in Sheffield, UK. Our cookware is carefully specified and manufactured using high quality materials to ensure it delivers a lifetime of satisfaction.